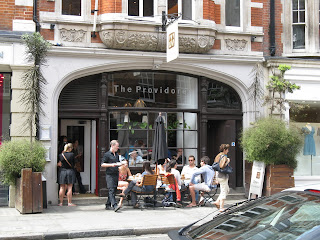 This weekend, a window in my heart opened up a bit, and London sneaked back in.

For four years I called this sprawling city home and last year I returned twice on media trips, so it hasn't been that long between drinks. But it has been an age since I really felt the frenetic energy of this chaotic, dirty city slide beneath my skin.

Early Saturday morning, the Animator, Lola (the woman who lives inside the GPS) and I headed down the M4 to Queens Park. As luck would have it, the accommodation planets aligned, meaning we got to play house-sitter for the Animator's cousin Grant and his partner Sarah while they were out of town.

And what a glorious weekend it was – we were fed and watered at Kiwi chef Peter Gordon’s acclaimed Providores/Tapa Room restaurant in my old stomping ground of Marylebone High Street (pictured above), were spit-roasted by temperatures in the late 20s and began to understand how sardines feel when we squashed onto crowded Tubes.

We walked the streets of Soho, saw a drug bust, and the Animator drank the best flat white he's had since arriving on English shores at the Kiwi café Sacred Coffee in Carnaby Street, where I interviewed the Wellington owners for a magazine last year.

I even got the bargain of my life at the Banana Republic sale when I spied a fitted suit jacket for the insane price of £12.99!!! I initially thought it was a mis-print, or they’d let a lunatic loose with the price-sticker gun, but turns out that was, in fact, the price so with one swipe of the debit card, it was mine! Shazzy has hit bargain nirvana many times in her life, but the fashion gods have never been rooting for me as much as they were on Saturday. Bonus: it’s from BR's Petite range, so the jacket doesn’t have to go anywhere near a tailor.

Saturday night we met a Kiwi friend for a drink at a lovely Maida Vale pub, scoffed yummy Malaysian food and tried to figure out which house in Grant’s road belongs to singer Lily Allen. Sunday was spent leisurely wandering around Spitalfields Market and wondering which cool furniture and antiques we’d buy if our surnames were Hilton.

Drove home Sunday afternoon, feeling smug about the lack of tail-backs on our side of the road (does rush-hour in London ever end?) and collapsed in a heap with the Sunday papers and a large glass of something red.

Lovely, lovely London…I’d be back in flash if it wasn’t for the Animator’s absolute refusal to do so.
Posted by Sharon Stephenson at 08:45