Getting my Martha Stewart on

A few years ago, I read an interview with one of my favourite authors, Zadie Smith, who admitted she employed special software that blocked internet access, allowing her to write without distractions.

I should probably do the same, given how much time I spend tootling around cyberspace - especially when I'm supposed to be working.

But all that time sucked by interior design blogs (I justify it because I write for four interior magazines, so surely I should be up with the play on design trends, etc?) does sometimes prove useful.

Last night, while watching the rugby at the bach,  I spent hours rolling the pages of an old book into cones in preparation for the making of a cool paper wreath. Those who know me know that I've never been into the craft scene; home made stuff brings me out in hives and reminds me too much of a relative who spends her life producing ill advised stuff with a hot glue gun and far too many sparkles.
But when I spotted this wreath on an American design blog I was smitten. And, having inherited several yellowing books when we bought the beach house nine months ago, it seemed like a good way to use them.

It took two hours this morning to throw this puppy together and I am loving it. Not so enamoured by the hot glue gun bizzo (I swear, the first and last time I shall ever use one) so rest assured you won't have to endure any more tedious crafting posts. But overall, it was pretty easy to put this wreath together and I found the perfect spot for it in the living room wall, so go me.

The paper cones from last night's marathon rolling session, ready to be transformed (note the Animator's cute sketch of Bristol on the chalkboard cupboard): 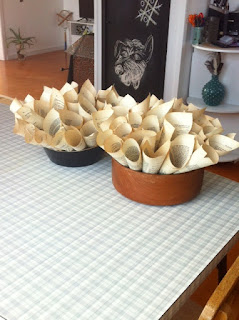 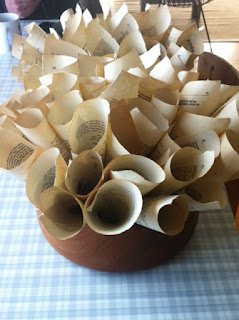 The final product - apologies for the dodgy photo quality but the sun was streaming in and it seemed criminal to close the curtains. 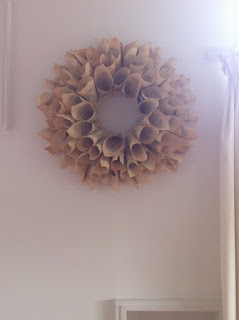 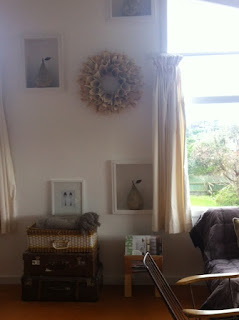 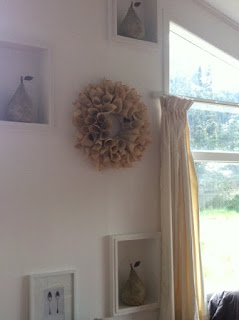 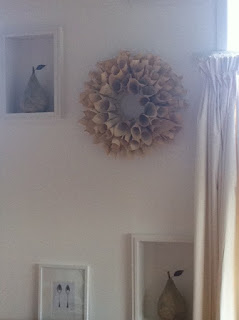 Posted by Sharon Stephenson at 21:21