Got a couple of media tickets to the opening night of the Alliance Francaise French Film Festival this evening.

As per usual, I rushed from work to dog walking to the cinema so had zero idea what the opening night film was. So I was overwhelmingly, pleasantly surprised by Rosalie Blum, the sweetest movie I have seen in a long time.

Get thee to a cinema IMMEDIATELY to see this joyous piece of cinema. If there was any justice in the world, this would be winning Oscars instead of the usual big-budget-car-chase-violent American bollocks that caters to the lowest common denominator.

Seriously though, this is the kind of film that reminds you why you once loved going to the movies. 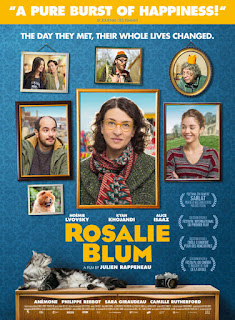 Posted by Sharon Stephenson at 21:27