We bought an apartment!

After much toing and froing and angsting, we finally bought an investment apartment.

The details are far, far too tedious to go into here but suffice to say, we are thrilled. And a little exhausted.

Bubbles have been consumed and people (lawyers, estate agents, hangers on) have been consulted. We settle at the end of April so for now, there's time to breathe.

And enjoy Easter. Well, not so much enjoy as use the four days off to paint the bannister in our Mt Vic house. The Animator, as you can imagine, is as far from overjoyed as it's possible to be. But he is sanding and prepping and grumbling and I am working (situation normal in our house, then).

Taking the edge off are some Hot Cross Buns (which seem to taste more like cardboard each year) and oodles of chocolate (don't worry, the running has resumed with a vengeance).

Last night, I unwrapped this egg, thinking it contained chocolate buttons (a not unreasonable assumption, given the wording on the box). As it turns out, the manufacturers couldn't be arsed putting said chocolate buttons INSIDE the egg, but instead, sealed them in a separate plastic baggie. Seriously? This is what it has come to. 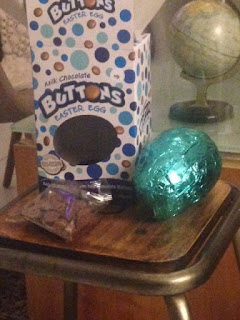 Posted by Sharon Stephenson at 14:13