The best thing since sliced soy and linseed 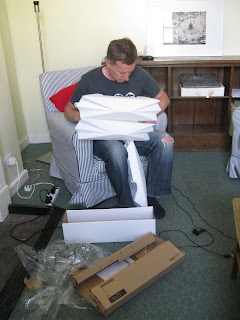 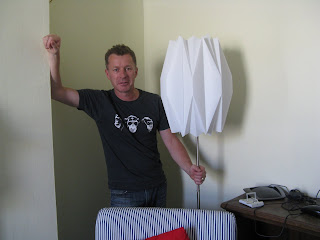 Those of you who know the Animator will know that he's made of equal parts Wonderful and Capable.

Today, once again, I realised how "well" I married when the Animator made short work of assembling this kitset lamp. Being from Ikea, it came with 8,426 separate pieces and instructions as confusing - and tedious - as The Da Vinci Code.

But instead of laughing at my bumbling efforts or scolding me for the liberal use of expletives, the Animator took charge and within minutes had it sorted.

Before crash-landing into the world of art, my husband paid the bills working variously as a mechanic, builder and owner of a roofing company. Which is probably why EVERY bone in this man's body is practical, efficient and utterly capable. It's also why I've never had to fill the car with petrol, oil or water, paint a wall, mow a lawn or even change a lightbulb in all the years he's shared my bed. I'm embarrassed to admit I probably wouldn't even know how.

The sub-text of the lamp construction is, of course, that Shazzy is once again wearing her Martha Stewart hat. It is obviously my lot in life to finance shipping companies so in nine months, when it's time to re-pack the boxes, I plan to have all sorts of homewear goodies nestling amongst the new clothes.
Posted by Sharon Stephenson at 06:51