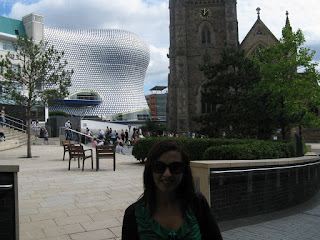 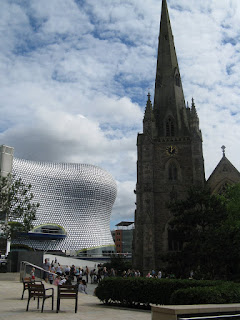 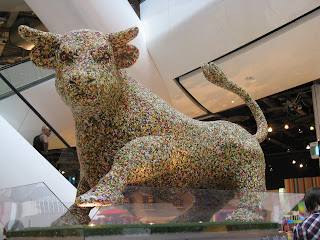 As part of our ongoing quest to visit places neither of us has been to before, today we braved crazy-arse drivers* and headed up the M5 to Birmingham.
Before I visited B-town, all I knew about this Midlands city of one million was that it was:
a) grim
b) populated by locals who “speak funny”
c) a centre for cricket, and
d) grim.
Admittedly, we didn't venture to the burbs or council estates that ring the city, but what we did see was green and leafy, and shattered all my ill-informed preconceptions. We spied Edgebaston, the international cricket ground, and were blown away by the Bullring, a ginormous shopping centre that shows what can happen when the Starship Enterprise is allowed to breed with a tin can. The fact that it rubs up against the 13th Century St Martin's Church further adds to the eyebrows-on-top-of-the-head visual spectacle.
Wikipedia tells me that some form of commercial enterprise has taken place on this site since 1142 - probably a bit different to the Gap/TK Maxx/Krispy Kreme shopping experience we had today, but it's still fascinating to think of those in whose steps we follow.
Couldn't resist taking a photo of the bull made entirely from jellybeans (third photo)...a snip at 22,00 quid. Who knew jellybeans were worth so much?

And yes, the sing-song Brummie accent is as delightful as I remembered. One young barista told us many locals try to 'dampen down' their accents which is a shame because I think they're lovely, as was our brief taste of the city.

One more location ticked off...

* What they don't tell you when you get your British drivers' licence: the locals are allergic to the indicator, and nor do they bother with the international convention of allowing two car spaces behind them when changing lanes. Presumably that's only for whimps.
Posted by Sharon Stephenson at 07:06