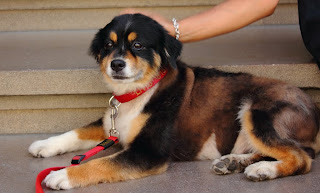 This wee fullah totally and utterly stole my heart in Seville a few weeks ago. In broken English, his owner told me he'd named him Livio, after the Roman emperor (and just in case he forgot, it was embroidered on his collar). I swear to God, he was such a doll I could quite easily have shoved him in my handbag and legged it.
Yes friends, canine withdrawal symptoms have kicked in big-time. Fortunately we just have just signed up for what we used to do at home - volunteering at the RSPCA - so hopefully that should go some way to prevent me from turning into the kind of woman who scarpers with other people's doggies.
Posted by Sharon Stephenson at 05:35