What I like to call a snakes-and-ladders kind of week - a few moves forward, only to slither back down.

But today at my (hopefully) last visit to the physio to fix my dodgy shoulder/neck, a chink of light filtered in.

My lovely physiotherapist, an English import who followed a man to NZ, said to me,"You have such a positive energy. It's why you've chosen such an interesting path. Don't ever stop being you".

As well as being better than a bucket of red wine or a fistful of chemicals, this woman is amazing at what she does. Not only is my shoulder sorted, I also have a smile on my face for one of the first times this week.

The following made me beam from ear to ear for another reason. Let's be clear, I don't approve of armed conflict in any shape or form, or of using innocent animals as cannon fodder, but even I couldn't fail to swell with pride at British army dog Theo who was today awarded the UK's highest award for animal bravery. The poor poppet died a few hours after his handler was killed, apparently from stress and a broken heart. Proves once again that canines are superior to us in every possible way. 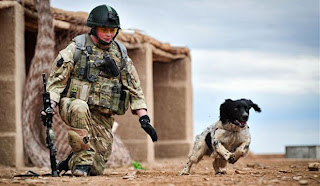 Posted by Sharon Stephenson at 19:32