I wouldn't say I'm the world's biggest Apple fan; yes I have an iPhone (but it's so old and dodgy it may as well have come out of the Ark) and an iPod, which makes moving my lardy arse around the waterfront slightly more bearable.

But I hate Macs with a vengeance (in one recent contract, I was one of only two hold-outs in the marketing team who requested a PC instead of one of those overly large, overly designed computers). And I can't imagine a universe in which I would wear an Apple Watch.

Still, that didn't stop me from writing a story for NZ Business Magazine about Nic Gibbens, who runs a Kiwi startup that's developing apps for the watch (click here to read).

I should probably illustrate this post with a pic of an Apple Watch but Nic's dog Pootle is so goddam cute, I had to include this one. 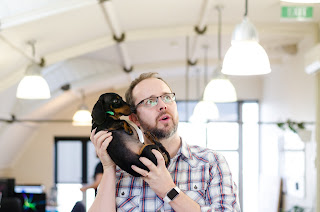 Posted by Sharon Stephenson at 11:43