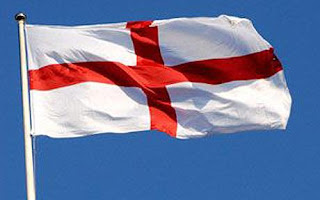 Although I'm loving life's Second Act, it isn't all beer and skittles over here.

Currently a tsunami of patriotism is washing over England as the nation becomes obsessed with a bunch of over-preened millionaires chasing a ball around a paddock.

The most obvious manifestation is the use of St George's flags to cover every possible surface, from shops and cars to houses and offices. The deeply unattractive bloke fixing my neighbour's roof felt so moved by Capello's lads he even had the red cross tattooed on his pale, pudgy belly. Needless to say, he spends as much time with his shirt off as possible.

A long time Arsenal supporter, it's not the Beautiful Game I object to but, in much the same way as I was keen to get out of NZ before next year's Rugby World Cup, overt displays of nationalism - no matter what the stripe – make me want to crawl under the duvet.

I'm all for the World Cup being a fleeting chance for humanity to unite, to help bounce South Africa out of economic Armageddon, etc, etc. But do we really need such jingoistic overkill?

A pub I walk past every day is advertising itself as a 'World Cup Free Zone'. I may have to move in there....
(Pic: Telegraph UK)
Posted by Sharon Stephenson at 21:01