To all the dogs I've loved before 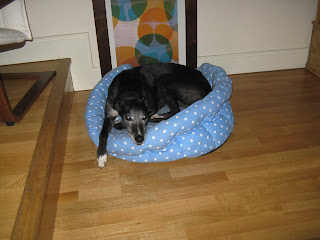 If there was crown for the most farewells said in the shortest period of time, it would currently be super-glued to my head.

Last year, I bid farewell to my beloved terrier Brompton as he made his way to doggy heaven. Six weeks ago, I said goodbye to his rambunctious sister Molly and, later today, I will walk out of the delightful Woolly's life.

Just before his 15th birthday, Brompton the Beautiful received an unwanted present: a horribly large cancerous growth near his groin. Making the decision to end his suffering was probably the hardest decision Husband and I have ever had to make. But decide we did and the end was, mercifully, swift and painless. Not a day goes by that I don't think of Brommie and the joy he brought into my life.

Leaving Molly behind also deeply perforated my heart and I still find myself tearing up at odd moments when I recall how close we grew in the last few months. But I am eternally grateful to our good friends Doug and Suzi who, despite uprooting their own lives and moving back to San Francisco, managed to find a place in their hearts – and home - for Ms Molly. Which means my baby will soon be an American dog and I can't wait until Christmas when I can see her again.

Woolly, meanwhile, is a black, short-haired lurcher (pictured above) who was rescued by his lovely owner Clare from an abusive home five years ago. Unlike the slightly pudgy, cuddly dogs I've known, Woolly is slim and angular and would be taller than me if he chose to stand on his hind legs. But when he turns his sad, brown eyes my way, I totally melt. For a month now, I've walked him twice a day in beautiful Brandon Hill Park which we amble around slowly as he gets the doggy news from what seems like every tree and blade of grass. I'm reminded of his size and strength every time he paws at the earth after toileting, sending big clods of grass flying. But he's such a gentle wee soul – except when it comes to other dogs or dastardly squirrels that insist on taunting him – and in the short time I've known him, I've grown to love him and his jaunty bandannas.

Now, however, I've landed a 'real' job, which means having to trot out yet another goodbye. Sweet, timid Woolly, I'm so pleased to have met you and sad that we won't be spending our days together any more. I hope, though, that if you ever need looking after at weekends, you'll think of me...
Posted by Sharon Stephenson at 22:59