The English sense of humour 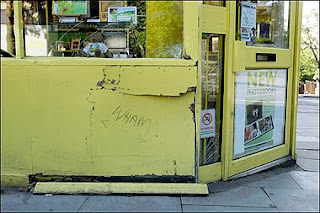 Long before some imbecile came up with the irritating construct that is Twitter (tedium as it happens, when it happens), there was another form of communication that people used to share their sense of humour with the world.

Take a bow graffiti, where the only equipment needed was a spray can/marker pen and a flat surface. What's more, graffiti usually involved the engagement of more brain cells than it takes to populate the Twitter-sphere (as far as I'm aware, no-one ever grafittied about what they had for breakfast or what they're wearing today).

One of the best pieces of wall art I've seen in a long time is the message that now adorns Snappy Snaps in the toney North London suburb of Hampstead. This, you might recall, is the ridiculously named photo development store made famous by George Michael who mistook it for a parking space after one too many dodgy cigarettes (an error of judgement that saw him spend a month behind bars).

On the infamous wall, some wag has written one simple word: “Wham”.

The Poms may have their faults, but a rubbish sense of humour ain't one of them.

Posted by Sharon Stephenson at 05:55