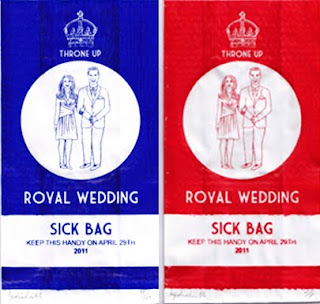 The estimated cost of lost productivity on a regular bank holiday in Britain which PM David Cameron has ordered April 29 to be (something to do with a ridiculous royal wedding in which I have ZERO interest. But ta for the holiday, chaps.)

The amount the English coffers are estimated to be boosted by. It’s not like they couldn’t do without it.

The estimated cost of security provided by London’s Met Police over the course of the wedding week. Doesn’t include the equally hefty bill for the services of five government departments – including MI5, Intelligence and Defence – to help corral the throngs of gawkers.

The estimated amount of time to clean the streets of London, beginning four weeks before the nuptials and continuing for up to two days after, using 140 extra cleaning staff.

The number of additional spectators expected to put pressure on the already overtaxed underground, accommodation and streets of London town. That’s in addition to the average 500,000 visitors to the capital on any given day.

The sweetest number yet. Thanks to the confluence of Easter, the May Bank Holiday and this sodding wedding, taking three annual leave days gives you 11 whole days en vacances.

We are off to Malta for the extended break – to sit in the sun, read, relax, eat and do enough to populate a few travel pieces. For that alone, I give those irritating royals begrudging thanks.

Posted by Sharon Stephenson at 02:15