You know you are loved when

you get into work after a week off and these photos are stuck inside your laptop, one under another, nestled together like a Russian doll.

For those of you not familiar with the phenomenon that is Breaking Bad (why are we even friends?) these photos are of Jesse Pinkman, one of the main characters, who throws the term 'bitch' around like confetti. In fact, in a GQ interview, actor Aaron Paul said he cannot walk two paces without someone yelling 'Yo bitch', which has become his catchphrase. And yes, it looks silly on paper but when uttered by the stupendous Jesse/Aaron, it makes a great deal of sense.

While we're on the subject of sense, you may say that a woman of advanced age who's infatuated with a fictional character - and a junkie, ne'er-do well one at that - is ever so slightly bonkers. But I will pretend not to hear you.

So anyway, here's to the lovely boys at work who know of my love for Jesse and Breaking Bad. I laughed like a drain when I found these pictures this morning and stuck them on the desk next to me where they have been a source of amusement for the marketing team all day. I only have about six weeks of this contract left which is a big fat shame as it's one of the nicest I've had in a long time. But that's the life of a contractor... 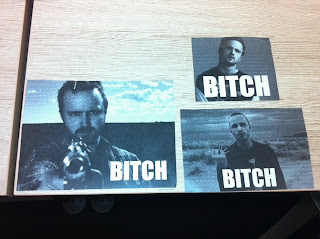 Posted by Sharon Stephenson at 20:47