This is the adorable face that greeted me when I got home today, after the schlep from LAX. 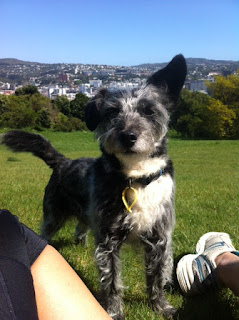 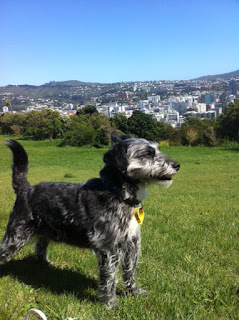 I now know how sardines feel, having been squashed into economy for the long haul flight (oh for those airlines who give media business class seats!) but I met a fabulous Kiwi who lives in the South of France who is going to make a great story for one of the magazines I scribble for. I'm all about making lemonade, etc.

During the two weeks I was away, someone switched on the sunshine. So after unpacking and chucking on a load of washing, there was a glorious walk in the Town Belt with this furry bundle of goodness. We ran into several dog walking mates who said they'd missed me and asked about my travels, etc. It is sooooo good to be home and to be a part of such a nice community. I know it sounds like a big, fat cliche - and this could be the jet-lag talking - but I sure lucked out with the life I have and the place I live and the people who share  my world. It's great to wander but it's much, much nicer to come home.

Speaking of wandering, had a fabulous weekend in LA and will sort those pics out later this week. For now there is work to be done and sleep to be had and furry ears to rub.

Posted by Sharon Stephenson at 13:32