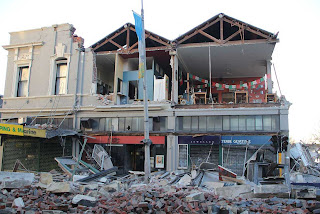 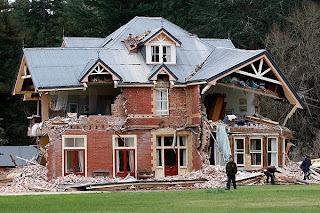 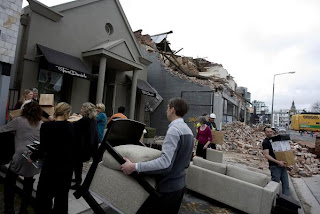 When you turn up to a new facialist for the first time, you expect them to comment on how long it has been between treatments, how manky your skin looks and how the unholy trinity of sunshine, late nights and advanced years are taking their toll.

What you don’t expect are their first words to be: “I thought you might have cancelled today because there’s been a major earthquake in your country!”

It took a few minutes to establish that a 7.1 earthquake had rocked NZ’s second largest city, Christchurch, in the early hours of (their) Saturday morning. And another few to discover that no-one had died. Facial over, I rushed home where the Animator and I anxiously scrambled for any snippet of news we could find on the BBC, on NZ websites and on Facebook. We don’t have any family living in the Garden City, but I’ve visited many times for work (including a fantastic media junket where I covered the International Busker’s Festival a few years back and was royally fed and watered for a gloriously sunny, fun weekend). Several friends also call this most English of NZ cities home.

What was most shocking was the devastation – watching 3 News being streamed into my living room 19,000km away and seeing places I know flattened beyond recognition. It’s hard to shake the feeling that this kind of malarkey only goes on in “other places”.

They say the recovery costs will be around the $1billion mark. Thankfully we have a government committed to footing this bill, unlike those in countries such as Pakistan and Haiti.

When you live in NZ, you get used to volcanoes and earthquakes, just as our cousins across the ditch learn to contend with snakes and spiders the size of bread plates. My UK colleagues have been bemused by tales of the earthquake drills we have at school, where we learn to cower under desks or in door frames as far away from windows as possible. They have smirked at my account of the emergency rations we squirrel away – tinned foods, bottled water, blankets and torches – for when the Big One hits. And I’ve even regaled them with stories of the Civil Defence bunker in the basement of our Parliament building, The Beehive, which I once visited as part of a PR disaster recovery exercise (back in the day when I had a ‘Real’ job).

I don’t think I’m blowing anyone’s trumpet too loudly when I say that Kiwis are tenacious, practical and not overly given to indulging in hand wringing or whingeing. We are a nation of individuals with a strong can-do attitude instilled in us by isolation and a pioneering spirit. As a result, we’ve earned a reputation for being able to make anything out of a piece of Number Eight fencing wire and a heap of determination. Mother Nature throwing her toys out of the playpen won’t rattle the good citizens of Canterbury; they’ll just roll up their sleeves and get on with returning to life in one of the best countries in the world.

The thoughts of Kiwi expats everywhere are with them…
Photos: The Press
Posted by Sharon Stephenson at 22:42