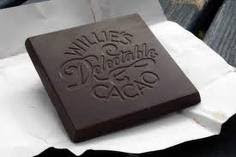 Those who say money can't buy you happiness have obviously never handed over four quid to Willie Harcourt-Cooze.

Otherwise known as the UK's King of Chocolate, Willie's 100% pure cacao is like doing backstroke in a sea of deliciousness.

The first I heard of the eccentric Brit was when NZ telly screened a reality-style show earlier this year about Willie's mission to grow his own cacao in Venezuela and convince the mass produced, milk-chocolate loving Poms to switch to the dark, uber unctuous stuff.

With a passion wrapped up in posh vowels, Willie overcame more setbacks than anyone should have to endure to achieve his dream.

Last week I discovered that temple of ridiculously glorious consumption, Harvey Nichols, stocks Willie's wares and, before you could say “Aren't you consuming your whole day's calories at one sitting?” I had signed up for the chocolatey carnival of cholesterol.

Probably the most compelling reason to spend £4 I've ever come across.

Posted by Sharon Stephenson at 06:39