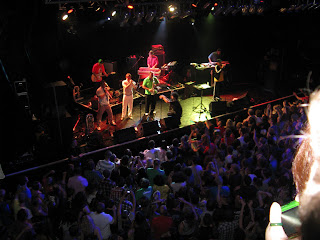 I'd be the first to say I've had a pretty fortunate life. Good health, education, travel, a great marriage, good friends and family: tick, tick and big fat tick. Plus, as I've recently come to appreciate, my passport entitles me to live in a country that isn't at war with anyone else, has a high standard of living and few people to ruin the view.

So fortunate, yes. But lucky? Even though I've laid out the welcome mat several times, Lady Luck has seldom wiped her feet on it. In my lifetime, all I've ever won is a meat pack (mighty useful to a vegetarian), a toilet roll doll holder and a magazine.
The Animator, however, practically has the lucky one on speed-dial: he only has to walk past a casino and his bank balance swells, and he's won Lotto so many times (including $12,000 on one memorable occasion) I'm surprised they don't ban him from playing.
But yesterday I, too, found out what it's like to eyeball Ms Luck. We'd dragged our hungover selves out of bed to watch the All Blacks beat the Wallabies by one point at the Walkabout pub and, afterwards, started chatting to some fellow Kiwis. Turns out they were up from London to see a gig by iconic Wellington band Fat Freddy's Drop who we didn't even realise were in town. So we shot down to the O2 to see if we could bag us a couple of tickets but, dammit, they were all sold out.
Leaving the arena dejected, we came across the band's roadies unloading the truck and got yarning to their videographer who, Welly being the villlage it is, knew some of the same folk we did. Hearing of our plight, he offered to leave us two free passes on the door that night.
So Saturday night saw us rocking the house with hundreds of others as our favourite band worked its way through its backlist. Having expected a homegrown crowd, I was surprised at how many Brits were there. Just goes to show that music crosses all boundaries.
So a rocking night out – and a free one at that. Now if I could just figure out a way to get the lucky chick to hang around, there are a few other issues I'd like to discuss with her...
Posted by Sharon Stephenson at 06:08