You know that horrible feeling when your heart and throat become intimately acquainted?

It's happened to me on various roller coasters, when I was 13 and involved a car accident and in a dark London street one night. It happened again today when I was walking Bristol in the town belt and an ENORMOUS dog (more of a horse, really), came barrelling out of the undergrowth and launched himself at my gorgeous baby.

Being the over-protective dog mama that I am, I tried to grab the beast but he was too fast and swerved past me. I think the 'F' word may have made one or two appearances as I ran to insert myself between the two dogs. Fortunately the black dog only wanted to play and despite being about a gazillion times smaller than him, Bristol gamely joined in the canine romp. I also played nicely with the owner, chatting about how much her genetically-modified pet eats but have to admit to cringing when Bristol was 'rolled' by his playmate a few times.

But he was fine and once again, he made me so proud of the way in which he interacts with all manner of people and dogs. My love for my dog has officially reached the idiot stage, where I just stand and smile at him like a loon. 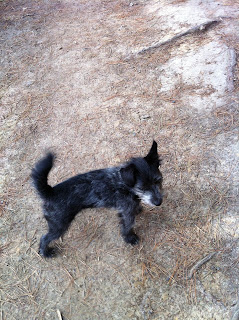 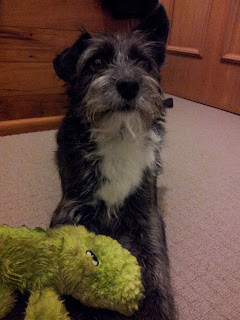