Last night we had our final SPCA puppy walk of the year. It was gloriously sunny (the season has finally remembered its name) and I had the pleasure of walking this wee sweetie - a four month old heading dog.

The Animator joined us after work with Bristol, as he is wont, and wee Brizz wasn't terribly happy his Mama was walking another dog. There was much puffing out of his chest and growling at the puppy, who only wanted to play. I couldn't be cross at the Hound for long though, the poor sweetie had been to the vet for his annual jab yesterday and was feeling a bit poorly.

But I've loved every minute of the SPCA volunteering this year (okay, maybe not the winter months when it was so cold I lost feeling in my toes) and I will definitely be back next year. 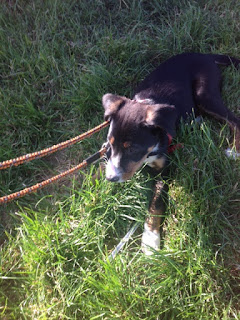 In other news, I finally got sick of our tacky tinsel/fake ivy wreath and attempted to make a fresh one using bits and bobs from the garden. God only knows how long it will last in this heat but it doesn't look too shabby, if I say so myself. 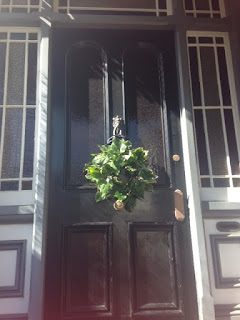 Posted by Sharon Stephenson at 17:35