If there are 10 million stories in the UK, then nine million of them currently involve snow: of temperatures plummeting to a record -26 degrees in some parts of the country, of hundreds being trapped in their cars on motorways, of the coldest December since records began and of the 250,000 whose travel plans slithered to an abrupt halt yesterday. Including us.

Having spent 12 hours at Heathrow, we heard some of those stories first-hand: of the elderly couple who were flying to New York to do a four-day dream cruise which they had missed; of the American student who sat on the runway for seven hours before they were allowed to escape back into the terminal (and were only fed one bottle of water and a sandwich during that time); of the lovely Italian bloke who was only in London for a meeting and had spent two days at the airport trying to get home; of the Texan businessman who bemoaned the fact that every time he transited through London, something went wrong. “This country just doesn't work,” he said over our tenth coffee. I was inclined to agree with him.

Even singer Lily Allen was among the stranded. Her tweet pretty much summed up the mood at Heathrow: “Still no idea if our flight will go, ever. Can't get a hotel anywhere and cabs can't get anywhere near the airport. Guess we're all kipping here.”

Last evening we decided we couldn't bear the thought of spending a night on the cold stone tiles, so managed to get back to the Sheraton, dug out the car from thick snow and drove back to Bristol. Admittedly getting out of London was a bit hairy and the thick pea soup fog on the way home didn't help, but the M4 was surprisingly clear (thank god for salt) and there were few cars so we got home in about two hours.

Today we should have been in San Francisco, seeing the lovely Molly, catching up with our friends and enjoying the positively tropical 12 degree temperatures, not schleping around snow-covered Bristol. I am so cross and disappointed I could chew my own hand off. But in the interests of making the best of a bollocks situation, after sleeping for 12 straight hours, we rugged up and headed out. Here's me in front of Bristol's beautiful Cathedral and with the fabulous seasonal decorations at Cabot Circus, my favourite of the city's shopping malls. 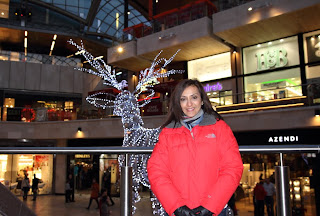 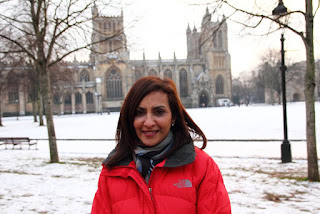 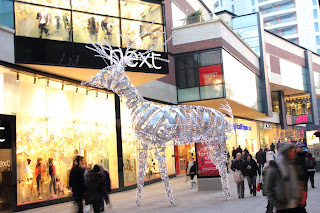 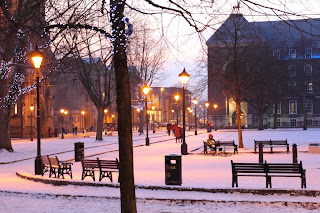 Posted by Sharon Stephenson at 10:49