Last night we had work Xmas drinks which was fun. But as I had an early start on Saturday morning, I left early. Oh how times have changed since Xmas 2010 when I lived in Bristol and not only did the work Chrissie bash drag on until the wee smalls, it was all levels of seasonal craziness (link here). Holy crap, I must be getting old... 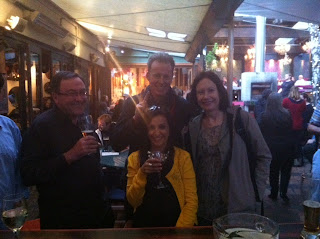 But this morning, Shazzy had places to be and people to interview. The Genee Dance Competition has rolled into town and I spent the morning watching ridiculously tall and slim ballet dancers do whatever it is ballet dancers do. And wishing my ancestors had swerved left years ago so I too could have ended up with the cut-glass English accents sported by the Royal Academy of Dance big-wigs who've flown here for the competition.

Later there was trip to Kenepuru Hospital to see the Animator's colleague who, a few weeks ago,  suffered a second stroke. The bloke is only in his mid 30s and to say his life is knackered is to marinate in understatement. If I believed in God, I would be asking about now why he had caused such a thing to happen to such a vibrant, energetic young father. But instead of being angry, as this bloke has every right to be, as we were leaving he said: "Life is sometimes shit, Shazzy, but most of the time it's not. We shouldn't forget that and live as though every day was our last..." For someone lying in a hospital bed, looking down the barrel of years of physio and speech therapy, to be able to say that blew my mind. I cannot think of more inspiring words to live by.
Posted by Sharon Stephenson at 18:55