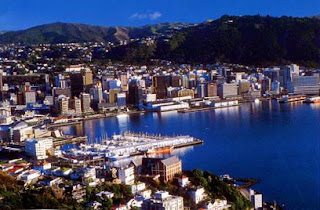 Forty eight hours ago, I was wearing a wispy summer dress and saying goodbye to dear friends.

This morning we flew into Wellington, into the teeth of a southerly gale that could have sliced us in two with the efficiency of piano wire.

The accommodation Gods are smiling down on us, because home for the next six weeks is the swanky Museum Hotel (thanks to the Animator's employers). I'm glad to see one of my favourite Welly spots, the Olive Cafe, is still standing but am surprised we don't turn into human popsicles walking there. Several friends tell me it's the coldest day of winter so far. Just my bleeding luck, then...

We contend with all sorts of fuckupedness at Vodafone who won't let us reinsert our former Sim cards; instead we have to buy new ones and learn new numbers.

My brain feels like runny scrambled egg and I need clothes pegs to keep my eyes open; so far it feels slightly surreal to be home – familiar, but also weirdly not.

While we've been collecting air miles, the world seems to have gone mad: we saw initial reports of the Oslo carnage before leaving Heathrow but now the full horror reveals itself. And almost the first thing we see on NZ TV is that Amy Winehouse is dead. Such a tragic, stupid waste of a brilliant talent.

It is now 7.30pm and it is all I can do to keep typing. I am too tired and at one with my comfy bed to stay awake much longer...