I can't leave without commenting on the Oompa Loompa effect 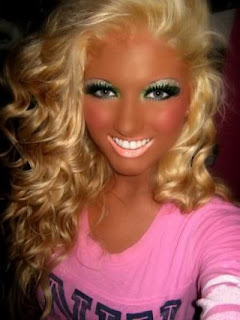 About 800 years ago I worked in central London editing BBC publications.

Most lunch times, a colleague and I would cross the road for a sandwich from Boots the Chemist, not because of their ability to do anything spectacular with a slice of bread and a hunk of lettuce, but because of the check-out chick, a grumpy Irish lass who clearly made liberal use of her staff cosmetics discount.

Every day, without fail, we'd get our day's entertainment from this woman's tendency to trowel on the orange foundation and NOT blend it in, leaving her face the colour of chicken tikka marsala and her neck as white as the driven snow.

If I was looking to be critical – and I am – I'd have to say that not much has changed in the UK in that respect. The nation is still awash with women who spray tan and drown themselves in foundation the colour of third-degree burns. Is there an excess of Fanta-coloured makeup that has to be used up before the Olympics? Or is it that the clarity of the mirrors in these women's homes is somewhat wanting?

Please make them stop. Or at least teach them the art of blending...