How I shall miss thee.. 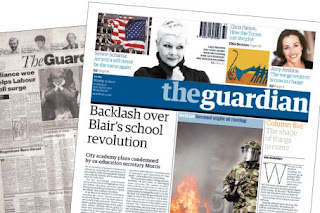 One of the things I will miss most about living in the UK is the fabulous Guardian. Reading it online is not nearly the same and I'm already mourning the loss of lazy Saturday mornings tucked up in bed with tea, toast and the best newspaper on the planet.

The last few weeks the UK media has been agog with the salacious details surrounding the phone hacking scandal and the subsequent closure of the 168-year-old News of the World. Be they tabloids or broadsheets, there's no doubt the Poms love the Fourth Estate; the Newpaper Society's website tells me there are currently 1200 regional and local newspapers in the UK.

The best take on Britain's print media probably comes from Bernard, the private secretary from the old BBC comedy Yes, Minister, who neatly summed up how Brits' choice of newspaper says oodles about their political, cultural and social leanings:

Sir Humphrey: “...what about the people who read the Sun?”

Bernard: “Sun readers don’t care who runs the country, as long as she’s got big tits.”

Posted by Sharon Stephenson at 02:18