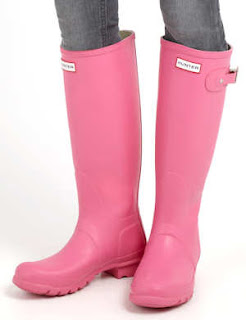 Not so long ago, the only good reason I could think of for wearing gumboots (or Wellies, for my British friends) would be...

Actually, there isn't one. I'm not five and I don't live on a farm.

But then I moved to the UK and discovered Hunters, who keep none other than the Queen's trotters dry. Over there, wellies have had somewhat of a fashion renaissance and it's not unusual to spot them outside their natural habitat of country/farm.

The only problem with Hunters is that you have to mortgage the family farm to be able to afford a pair. But one stupidly early Sunday morning at the Cheltenham Racecourse, Anita the Car Boot Queen spied these pink beauties and I latched onto them as though they were the last helicopter out of Saigon; they became mine for a mere seven quid (they usually retail in excess of 75 pounds).

This morning, a wedge of rain inserted itself into Wellington's summer and, hallelujah, I got to wear my pink Hunters for the first time. I'd wager I'm the only person in Welly, if not NZ, who has a pair of pink Hunter gumboots.

Posted by Sharon Stephenson at 17:09