Two of my favourite things on the planet - apart from clothes and canines - are baking and sharing said baking with friends.

To celebrate today's Bank Holiday, we invited our favourite San Francisco import, Donna, to sit in the sun and carb load with berry friands and a dense chocolate cake that fairly sloshes with red wine (I may not be drinking right now, but surely consuming it in baked form isn't the same?) Holiday gluttony is, in my opinion, the best sort.

Donna's architect daughter was over from Geneva, en-route to Indonesia to work on a large sustainable not-for-profit project, so it was fun to catch up on the last three years (the last time our paths crossed) and to plot the next three.

The rest of the day was filled in with a run in the Town Belt, work for a design magazine and research for a media trip in March (hark at me being all coy; let's just say it involves noodles, a ridiculous song that's named after a suburb and one of the tightest borders in the world).

Today's visual is of the red wine chocolate cake from the Smitten Kitchen blog, from whence the recipe came. I could, of course, have taken my own pics but the God of Bank Holidays told me I didn't have to. 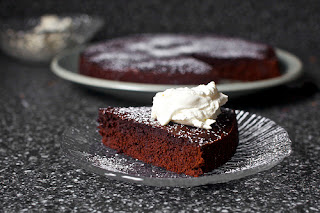 Posted by Sharon Stephenson at 18:22