Those of you who know me know my life operates on a 'dogs not kids' policy.

So it might surprise you (as it did me) that I would spend my Sunday evening watching littlies - and not so littlies - prance up and down the stage at their end of year dance recital. My friend Lorna owns the dance school and over the past few months, I've heard all about the show on our weekly dog walks. Keen to support her, I put aside my allergy to rug rats and yesterday evening we trotted along to Wellington High to watch about 200 of her students go through their paces. And it was a lot of fun - the adult tap, jazz and modern dancers were Glee-like quality and the costumes were fantastic.

However it was the young ones who really made our night, especially the three and four year olds dressed as Smurfs who used it as an opportunity to bust out moves entirely of their own making. The real star of the show was a wee girl who hadn't yet said goodbye to baby fat and was 10 steps behind everyone else. Bless her though, she wasn't about to let a small thing like a lack of co-ordination or rhythm stop her: she threw herself into the dance with wild abandon and cared not a jot that her moves bore little relation to anyone else's. I was laughing so hard I thought I might have to leave the room.

It reminded me of when my mother used to drag us along to her school's end of year concerts to make up the numbers - her five year old students would spend the whole time waving to their parents, or wandering off the stage or, on one memorable occasion, wetting their pants in front of a crowded hall.

Sadly we had to leave last night's concert at half time as we had an appointment with Japanese food. But oh my god, it was the most fun I've had for a while.

Even sadder is that I have no photographic evidence of the event so this image of a tubby Smurf, found on a half-arsed trawl of Google, will have to do. 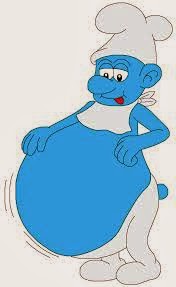 Posted by Sharon Stephenson at 22:37