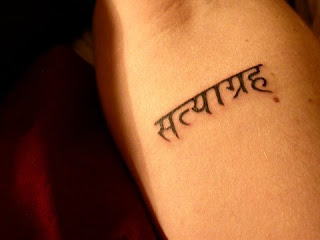 Overheard at the hairdressers this morning: two hip, but dim, young things doing a show and tell of their tattoos:

“You have to be, like, really careful who you go to because they can, you know, get it really wrong. Like my mate who thought he was getting the word 'peace' in Indian up his arm and then he went to Goa and someone told him his tattoo said 'penis'.”

I didn't like to tell him he probably meant Hindi; best to leave them to it.

Now we are off to drink several hundred litres of wine and watch the All Blacks beat the French in what promises to be the best game of the Rugby World Cup so far. Apologies in advance to my darling mates Frenchie and Pierre in Bristol....

Posted by Sharon Stephenson at 19:30