Regular readers will know that I love my house. That I am in awe of how the Animator and his band of merry tradesmen took a tired old girl and moulded her into a pretty spectacular, modern home. And all  within the space of six weeks.

In fact, I love her so much that next week I will finally be tying myself to the laptop to write about our adventures for Your Home and Garden Magazine, a commission that is so far behind it is almost in last year.

The only thing that has bugged me about the house since we moved in last November has been the upstairs shower. It was one of the few rooms the previous owners had dragged into this century so apart from lashings of white paint, we didn't mess about too much with it. However, the shower pressure SUCKED (apologies for the quite unnecessary use of caps but I cannot stress how much a piss poor shower upsets me). I had the choice of either hot water, delivered in a dribble or cold water at a more respectable pressure. But hot water and good pressure were seemingly unable to co-exist. I confined my ablutions to the tiny downstairs bathroom which at least gave good shower.

Today, we finally tackled the sucker and after a plumber spent two hours draining my bank account, we now have the best shower in Welly. It is hot as Hades and as strong as the All Black front row; I have just spent so long in there, my skin is almost flaking off.

A good shower might be a small thing to rejoice about, but sometimes the best things are.... 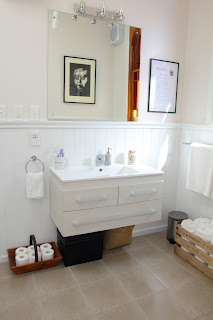 (pic of the upstairs bathroom - sadly no shot of the shower which is to the left of this shot. But you get the idea)
Posted by Sharon Stephenson at 22:09