The Grumpy Olympics were in full swing today - everyone from colleagues to the chick at the bookstore to the receptionist at my doctor's surgery seem to be enthusiastically competing.

Having blown out the cobwebs with a post-work run, the Hound and I found, as we rounded the corner to our street, a bastard neighbourhood cat attacking a poor defenceless bird. I raced over and snatched the tiny bird from the jaws of the stupid cat and legged it home. What I know about our avian friends would barely fill a post-it-note, but I somehow managed to get the bird into the laundry.

Bristol of course, was fascinated so I had to lock him outside while I trawled the internet for a local bird rescue organisation. I eventually tracked down a very nice chap who, unfortunately, focused only on rescuing injured ducks. He managed, however, to put me in contact with a woman in Upper Hutt who, despite being in the bath (!) calmly talked to me about the bird's injuries - the loss of most of its tail and wing feathers and a munted foot - and suggested I find a large box, fill it with newspaper, bowls of water and softened dog kibble and leave it be. It would, she said, be stressed after its ordeal. It's not the only one.

The agitated tweets coming from the laundry seem to have stopped; either the poor mite has passed or the dark, warm box is working its magic. I shall check on it before I go to bed.

Here's a photo of it shortly after the dramatic rescue, spurning our offer of water and bread. If you were in the vicinity of Mt Victoria tonight, that demented woman chasing a cat down the street was, indeed, me. 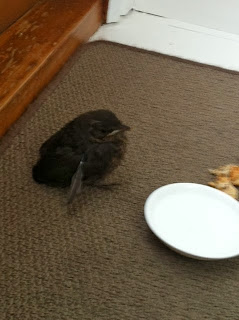 Posted by Sharon Stephenson at 20:25