Oranges are not the only fruit 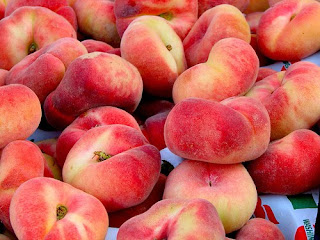 Saturday we found these odd doughnut peaches at a fruiterer on Gloucester Road.

Maybe I've led a sheltered life, but the words 'doughnut' and 'peach' have never left my mouth in the same sentence. Nor have I ever heard of the other names they go by: saturn peach, paraguayo peach, pan tao peach and saucer peach. Or donut peach, by people who don't know how to spell.

Whatever you want to call them, they're sweeter than regular peaches, with a top note of almond and wayyyy less juice. Which means you don't end up dripping sticky stuff everywhere and having to lick it off your hand like a dog (isn't that what everyone does?!)

I know what you're thinking: they look like nothing nature intended, and taste like a New Year's Eve party in the mouth. There's no way these puppies aren't genetically modified.

WRONG. Apparently doughnut peaches are a legitimate species of peach, first grown in China in the 19th Century. Who knows where the hell they've been hiding since.

Apologies, but a celebration of weird produce is about as interesting as it gets today. If you wanted cutting edge commentary, you came to the wrong blog....

Posted by Sharon Stephenson at 01:51