We interrupt this transmission to bring you some good news....

I get home tonight and turn on the TV, only to be assaulted by tales of sorrow and woe.

The voices on the BBC speak of the trial of that monster Ratko Mladic, of security forces opening fire on innocent people in Syria, of tornadoes in the US. I switch over to Sky News who headline with the European E.coli outbreak which has so far claimed 18 lives (I know how the poor PR flunky from the European Cucumber Association, or whatever the hell it's called, must feel because I once managed the PR function for NZ's largest dairy company when its milk powder was linked to the deaths of several Chinese babies; that wasn't a good day at the office).

I turn to the Guardian online and discover that Greece is sinking further into financial shit and that a boat ferrying 300 refugees is missing; I almost lose my mind when I read that lunatic Germaine Greer has been instructing dog owners to kill their pets in order to protect Britain's bluebells. Are you fu**ing kidding me?

As a journalist, trained in the old school ways of reportage, I understand the public's need to know, of the journalist's obligation to uncover the truth. But sweet baby Moses in the rushes, why does turning on the telly, or reading a newspaper, have to be so goddam depressing?

Thank god then that my inbox finally pinged with some good news – my old mate Ankit and his partner Dani are engaged! Currently living in London, via Welly, Ankit popped the question while on holiday in Spain. The old romatic rang me a few months ago to tell me of his intention to propose while on a hot air balloon ride at sunset over Seville; sadly, dodgy weather kicked that idea into touch. But he asked the question anyway, she said yes and now these crazy kids are engaged.

Ankit and I go back a few years when he was a newly minted lawyer and I was the PR Manager assigned to the legal team of a major telco. Not long after I arrived, the company announced a restructure, effectively freezing all our work. Which meant I spent a LOT of time surfing the net, reading the paper and basically being a mother hen to the baby lawyers. I seem to recall we also spent great chunks of every day in various forms of tomfoolery and laughter. Anyway, my contract ended and, as you do, I wandered off to the next gig and didn't give it much thought. Until I ran into Ankit at Auckland airport; I was on my way back from a media junket in Thailand, he was returning from his sister's wedding in Spain. Last November, while in Cardiff for the NZ/Welsh rugby game, we ran into each other again. I'm so glad that this time, we've stayed in touch.

A big fat congratulations, guys. Here's to wrapping both of you in all the love, happiness and laughter that exists in the world. I'm dusting off my hat and getting out my dancing shoes for your Wellington wedding next year...

(the happy couple pictured below, just minutes after the Spanish proposal) 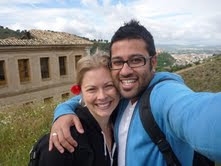 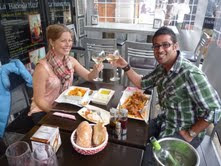 Posted by Sharon Stephenson at 10:03