I hate to begin the month with a whinge, but.... 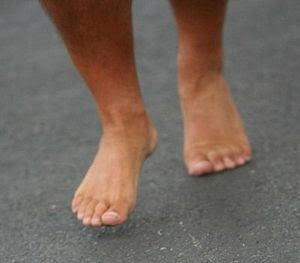 Yesterday someone finally turned on the sun and in the space of a few hours I saw FOUR blokes with bare feet – two in the supermarket, one walking down the street and one in the bank (WTF?)

And we're not talking hobos or homeless folk but regular men who were obviously so confused by the appearance of the strange golden orb in the sky that they mistook the city for the beach.

I will admit that Kiwis are starting to dress better, but the can't-be-arsed choice of attire is still very much the default setting. I once went to a wedding where the guests looked as though they had either just rolled out of bed or wandered in from the vege patch. True story.

But not wearing shoes whilst walking around town? Not only is it incredibly unhygienic it's also a whole universe of wrong.

Seriously people, is it too much to ask you to put your frickin shoes on?