The Pirates! Band of Misfits (also known as The Pirates! In an Adventure with Scientists if you're in the UK market), the stop-motion feature film the Animator worked on in Bristol, opened today in New Zealand.
We were first in line to see it and I am now drunk on sweet Pirate love. It blew my mind in the first few minutes and thereafter kept pounding the fragments into smithereens.
I tried to take a photo of the Animator's name in the credits (under Previs VFX, since you asked), but I got too excited and they were scrolling too quickly. I think his name is at the top of the screen on the right-hand side. 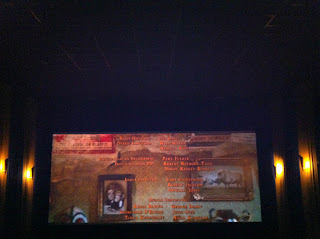 To make up for being so slow with my trigger finger, here's an official poster of the film.
Yes, I am in danger of becoming a broken record but you HAVE to see this. If you have room for only one movie this month, make it Pirates!. I am also not ashamed to say that I am ever so proud of that clever husband of mine... 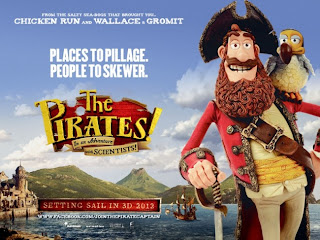 Posted by Sharon Stephenson at 20:56