Tonight I had possibly the scariest experience of my life when we had a 6.5 magnitude earthquake. Mother nature has been stomping her feet all weekend, starting with a terrific 5.7 jolt on Friday morning which, thankfully, I missed as I was walking to an interview. The earth moved again Friday afternoon but my friend Jo and I were walking our dogs in the Town Belt at the time so again, fortuitously, missed it.

We were woken by a 5.8 this morning (cue barking dog, diving under the bed, general chaos) and there was no avoiding tonight's quake when I was drying my hair. We both had the presence of mind to Drop, Cover and Hold but the deep grumbling seemed to go on for an eternity. Unlike the rest of the city - power-lines down, chunks of masonry littering the streets, windows blown out, roads closed - we fortunately experienced no damage but spent a good half hour wandering around straightening pictures and ensuring the house, and friends, were in one piece.

Tonight we are hunkering down and trying to ride out the charmingly named 'swarm' of aftershocks (come on people, can't we come up with a less sinister collective noun?); apparently there have been 30 in the last hour. The Animator has nominated himself Minister of Earthquake Watch - his current obsession is refreshing the GeoNet page every few minutes and reporting on the size and depth of the last one. An intervention may need to be staged.

All thoughts of the work we have do tonight are gone; we are nervously drinking wine and trying to find something amusing to watch to take our minds off it. Before this weekend, we had been loosely plotting our escape from Welly in the next three years - Waiheke Island was top of the list. After this weekend, we may well accelerate those plans.

Visuals are the aftermath of tonight's 6.5 shake. 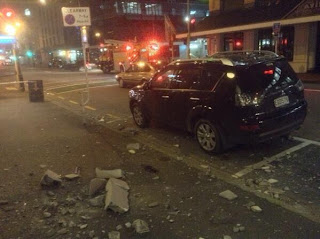 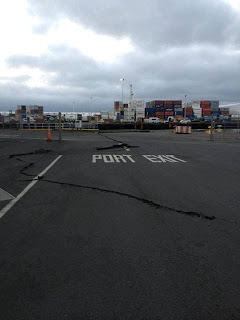 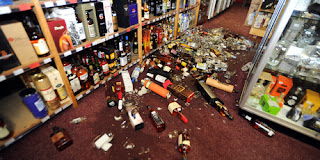