So THIS is why we're here 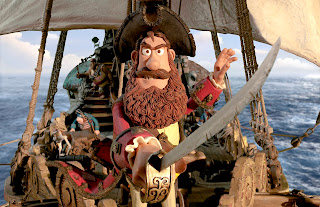 This is the reason we hauled arse 12,000 miles.
The first stills of the 3D feature film the Animator has been working on have been released.
The Pirates! In an Adventure with Scientists is the oddly-named Aardman stop-motion extravaganza that features the voices of Hugh Grant, Salma Hayak and Martin Freeman. And it looks FANTASTIC.
Even more exciting is that next weekend, Aardman is having an open day for family and friends. The Animator's cousin and her husband, diehard Wallace & Gromit fans, are flying over from Belfast for the weekend to come with us. Hubbie's previous role with Sir Peter Jackson in Welly was very much a closed shop; they didn't even have signage up, such was the level of secrecy surrounding their projects. So to be able to see what the Animator has been working on, and view snippets of the movie, will be all kinds of wonderful.
I am so excited, I'm getting a boner just thinking about it.
Posted by Sharon Stephenson at 22:00