Our two week anniversary in Aotearoa – and my first week back in the corporate comms saddle – couldn’t pass without being marked. And who better to raise a glass with than four of my favourite Welly peeps, Brownie, Steve, Sarah and Glenn?

There was, initially, some debate about where we should eat: having become accustomed to the UK’s more casual pint/curry combo, I vigorously waved the flag for a cheap and cheerful ethnic eatery. Besides, some of the best cuisine-related nights of my life have involved charmingly unprententious back-street trattorias, cafes and holes-in-the-wall.

In the end, we settled on the good old Asian fusion place, Chow on Tory, where I was pleased to note the jungle curry and delicious rosebud cocktails are still on-menu. If I wasn't already flirting with low-level alcoholism, those cocktails would certainly nudge me closer to it.. 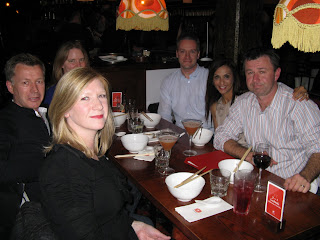 Posted by Sharon Stephenson at 11:26