Not everyone wants to be on tee-vee

Yesterday afternoon, while desperately trying to force words from my brain onto the screen, an email plopped into my in-box.

It was an invite from a member of the No Kidding group we joined last year. Seems one of NZ's main current affairs shows is doing a piece about why educated folk are increasingly choosing not to have kids and needed some talking heads. It wasn't a live i/view and there was the chance to set some boundaries, etc around what we were, and were not, comfortable talking about.

As much as I love banging the drum for over-population/depletion of the world's scarce resources/indiscriminate breeding/voluntary child-free-ness, I had to decline. Not only because I'm doing a similar piece for another (print) channel, but also because it's a news outlet I despise and because journos make the worst interview subjects. And, just quietly, because when I worked at TVNZ about a hundred years ago, we got to record ourselves reading the auto-cue at the newsreaders desk (a surprisingly hard task), and I realised then that I was not cut out for TV. 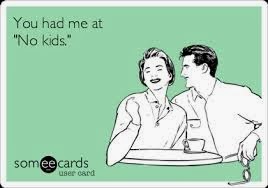 Labels: No Kidding, no kids, TVNZ