Flew down to Christchurch for work today and in the Air NZ lounge on the way home, heard two women talking about someone who was going out with one of their exes.

They spoke of her in terms that would make a sailor blush but, by god, she did sound pretty toxic. Having exhausted their repertoire of swear words, one suggested the aggrieved one do what she'd read about in a magazine: think about the nasty person as a red hot glowing ball in the palm of her hand, then visualise them changing colour until they're black and white and then finally reduce them to a speck.

"Start to make them smaller until they're a tiny dot and then blow them away," she told her friend. "It's a great way to lessen the importance of people you need to remove from your life and your mind. Practise doing that and before you know it, that person will mean less than nothing to you..."

Hokey, yes, but after two pinots is seemed like a good idea and as there is a toxic cow or two I'd like to remove from my radar, I might just give it a whirl... 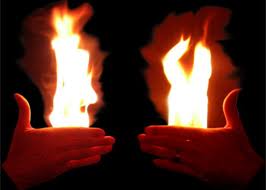 Posted by Sharon Stephenson at 20:51