Today I hired a couple of uni students for a major mail-out we're doing for all our customers.

One, in her fourth year of an early childhood degree, gave me a CV littered with spelling mistakes (don't laugh, this girl will probably end up teaching your kids). The other young woman thought it would be cool to stick a photo of herself partying at a sporting event on the cover of her resume. WTF???

They were nice enough, though, and started telling me about a similar envelope stuffing gig one of them had completed earlier this week. Apparently there was this "really creepy older guy who doesn't want to get a job and plans to be a student as long as he can".

"How old was this chap," I enquired.

"What's that in years then," I asked.

"Ohhh, at least in his late 30s," she replied with a shudder.

I'd rather be old than stupid, honey.... 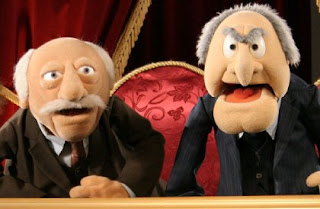 (Pic credit: The Muppets)
Posted by Sharon Stephenson at 20:03