This morning, while minding my own business, an email plopped into my in-box offering me a free media trip to two neighbouring cities in September. Hint: one features maple syrup, the other rain. I just have to sort out a few details and hopefully it will be done.

If that wasn't enough, I was offered a contract at a place I spent my Thursdays and Fridays back in 2009. Lovely folk, fascinating work and a chance to stretch those PR muscles which haven't really had a decent trot around the park for some time now. I was honoured to be asked back and took about 0.5 seconds to say hell yes.

And then a 2000-word feature that's been a little like wrestling a rowdy octopus for a few weeks finally fell into place when I secured a couple of interviews with subject experts.

Apologies for hogging the happiness train today - but it has been gone from my station for far too long. 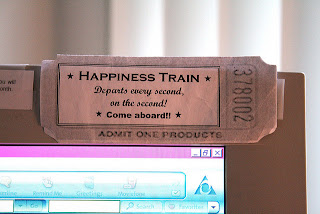