Time for a bit of culture

Tonight after work I was invited to a charity art auction organised by an organisation I once contracted to.

It had been a long day, the last before I head away for a week, and I was busy drawing lines under projects. I was also desperate to get home to the Hound; as silly as it sounds, I'm starting to feel the familiar guilt that always strikes pre-departure. The strings of my heart twang at the thought that Bristol will feel we have abandoned him; it's happened to him at least once before so perhaps he feels our absence more keenly? Could be I'm projecting, but before I go away there's always this mad rush to top up his love bank, so he has something to draw on whilst we are gallivanting around the globe.

But back to the auction. I had promised an exceedingly lovely woman that I would attend so off I trotted. Once there, a fortifying Pinot and yummy snacks perked me up. And I said hello to, in no particular order, a former Governor General, the current Race Relations Conciliator and a couple of MPs. It was that kind of function.

But I also got to eyeball some NZ art at close range and traded gossip and laughter with a couple of former colleagues. Just what this little girl needed to turn up the corners of her mouth.

Today's visual is of one of the pieces that was auctioned. It's by Kiwi artist Shane Hansen, who I interviewed for a magazine about 15 years ago. All I can remember of that interview is that the photographer and I got lost trying to find his studio in, of all places, Palmerston North. 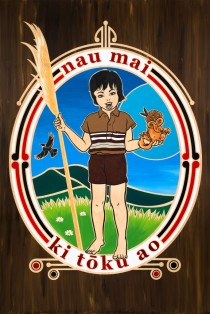